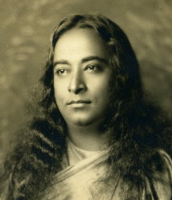 “There are two ways of approaching God in Nature. One is to separate the Lord from all His manifestations. ‘Neti, neti,’ is the saying in India: ‘Not this, not that.’ Something of that consciousness there must always be, lest one become trapped in attachment to form.

“The other way is to behold the Lord manifested everywhere.

“The first way, by itself, may be too austere for most devotees. The second way is much sweeter. Best of all is a combination of both.

“The Divine Mother is busy with Her housework of creation. The baby devotee cries, and She gives him a toy to play with—riches, perhaps, or name, or fame. If he cries again, She gives him another toy. But if the baby throws everything away and cries for Her love alone, She picks him up at last and whispers to him lovingly, ‘If you really want only Me, and not My gifts, then come. Be with Me forever on My lap of infinity.’”

A Hindu student in America once laughingly told Paramhansa Yogananda, “My grandmother in India listens to bhajans [devotional songs] on the radio. At the end of the singing, she places a flower on it as a devotional offering—as if the radio were a holy image!”

The Master smiled at this encounter between scientific materialism and traditional piety. “And yet,” he commented, “your grandmother is not so superstitious as she seems. For with the flower she is expressing her gratitude to God. It isn’t that she views the radio as a deity. She is simply seeking an external focus for her devotion.

“And isn’t it good to see God enshrined everywhere? We think of the radio as man-made, but from Whom came the intelligence that made the radio? From Whom came even the materials from which it was created?

“When we seek to remove God from our environment, it becomes all too easy for us to remove Him from our lives altogether.”

—from The Essence of Self-Realization by Swami Kriyananda

This entry was posted in cosmic mother, divine mother, yogananda. Bookmark the permalink.