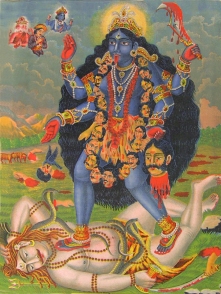 Lithograph of Kali from Kolkata, c. 1895

Paramhansa Yogananda often spoke and wrote of Divine Mother in the form of Kali, the way that She is frequently worshiped in Bengal.

Kali is widely misunderstood, especially in the West, due in part to fear-mongering during the British colonial era and their exaggeration of the “Thugee” sect of criminals who worshiped Kali. This distortion was unfortunately given new life by the popular movie Indiana Jones and the Temple of Doom.

Kali’s vivid iconography is naturally confusing to many people. Yogananda described the deeper meaning of Kali’s imagery in the following discussion.

“One thing I cannot appreciate in the Hindu religion,” said a Christian severely, “is its plethora of gods.”

“There are many,” agreed the Master. “Each, however, represents an attempt to remind us of God in one of His innumerable aspects. They are abstractions—a way of saying, ‘No human being can really understand what God is, but here, at least, is something that He does.’

“Take, for example, the image of the goddess Kali. This is a good case in point, because, out of all Hindu images, Kali has been the one most misunderstood by Western minds.

“Kali stands naked. Her right foot is placed on the chest of Her prostrate husband. Her hair streams out, disheveled, behind Her. A garland of human heads adorns Her neck. In one of four hands She brandishes a sword; in another,  a severed head. Her tongue, usually painted a bright red, lolls out as though in blood-lust.”

At this point the Christian shuddered. Yogananda grinned roguishly.

“If we thought that this image depicted Kali as She is,” he continued, “I grant you, it might awaken devotion in very few devotees! However, the purpose of that image is to describe certain universal functions of the Divine in Nature. 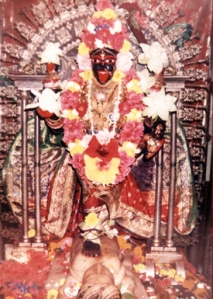 “Kali represents Mother Nature. She is Aum, the cosmic vibration. In Aum everything exists—all matter, all energy, and the thoughts of all conscious beings. Hence, Her garland of heads, to show that She is invisibly present in all minds.

“The play of life and death expresses Her activity in Nature: creation, preservation, and destruction. Hence the sword, the head, and a third hand extended, bestowing life.

“Her energy is omnipresent; hence Her streaming hair, representing energy.

“Shiva, Her husband, represents God in His vibrationless state, beyond creation. Thus, He is depicted as supine.

“Kali’s tongue is protruding not in blood-lust as most people believe, but because in India, when a person makes a mistake, he sticks out his tongue. In the West, don’t you express embarrassment somewhat similarly? You put your hands to your mouth.

“Kali is depicted as dancing all over creation. This dance represents the movement of cosmic vibration, in which all things exist. When Kali’s foot touches the breast of the Infinite, however, She puts her tongue out as if to say, ‘Oh, oh, I’ve gone too far!’ For at the touch of the Infinite Spirit, all vibration ceases.

“Kali’s fourth hand is raised in blessing on those who seek, not Her gifts, but liberation from the endless play of maya, or delusion.

“Those who feel themselves attracted to Nature’s outward manifestations must continue the endless round of life and death, through incarnation after incarnation. Those devotees, however, who deeply long for freedom from the cosmic play worship God in the indwelling Self. Through meditation, they merge in the infinite Aum. And from oneness with Aum they pass beyond creation, to unite their consciousness with God—timeless, eternal Bliss.

“The statues of Kali are not intended to depict the Divine Mother as She looks, but simply to display Her functions in the aspect of Mother Nature. 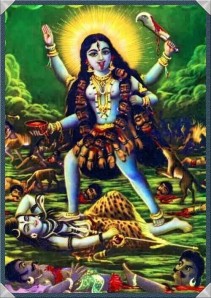 “The Divine Mother is, of course, without form, though we may say also that Her body is the entire universe, with its infinity of suns and moons. She can also appear to the devotee in human form, however. When She does so, She is enshrined in supernal beauty.

“All the images of gods in India are symbolic. We must look beyond their shapes to the hidden meanings they represent.”

—Paramhansa Yogananda, from The Essence of Self-Realization, Ways in Which God Can be Worshiped

More from Yogananda on Kali:

4 Responses to Kali Iconography as explained by Paramhansa Yogananda